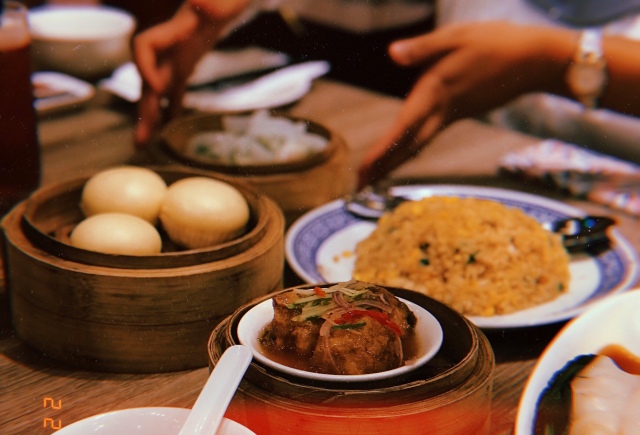 OK, so I’ll let you in on a secret: if we’re friends, especially new friends, I’ve probably brought you to Dolly Dim Sum at some point.

This dim sum restaurant chain provides, for me, the perfect answer to the most basic, foundational question of urban life, i.e. “What do you want to eat?”* When you grow up on a steady diet of malls upon malls upon malls, it gets tiring trying to figure out what to eat after a while because you get so inundated with all the choices. Do you: want to go somewhere that’s known to be a crowd-pleaser, where you can just get over the perfunctory need to satiate a hunger, such as a mamak or a food court or even a McDonald’s? Or maybe you want to keep things interesting, in which case maybe you try out one of the other generic non- or otherwise slightly-pricier-chain restaurants around. And if you’re trying to impress because you’re a gastronome, then maybe you try somewhere else that’s not a mall.

I usually bring people to Dolly Dim Sum if it’s an Occasion, like we haven’t seen each other in a while, or if it’s one of our first times hanging out. It’s nice and expensive enough to make lunch or dinner feel special rather than just the satiation of a basic need, but also casual enough not to put the situation on edge, unlike various other upscale dim sum, or generally Chinese, restaurants*. It also provides an excuse to just stay in the same spot for an extended amount of time without having to figure out what to do after eating, because the food just keeps piling on and on, because that’s how you eat dim sum. And best of all, it’s accessible for KL kids, with branches in Nu Sentral, Pavilion and Avenue K. No, actually, best of all, it’s fucking good.

There’s just something about dim sum that I think is impossible to fuck up. Sure, you can have cheap, tasteless dim sum, but the only truly bad dim sum is, I think, cold dim sum. There’s just something so homely to me, and so easy to love, about anything that’s been steamed. And dim sum is lovely as comfort food, because of its warmth and oiliness and chewiness. The way you bite in and you get a mouth full of that warm, familiar flavour that you’ve been raised on ever since you were a child.* How every dim sum is wrapped up, but when you bite in it all just melts into. I love it all. The steam fogging up glasses. The bamboo nest. The perfect, inimitable texture of a bao.

I come back often, and I’m always excited to bring people there who’ve never been. There’s probably nothing particularly amazing about the way they make dim sum, and most other Chinese Malaysians are probably used to the kopitiam style of dim sum, but. And maybe there’s something to be said about a dim sum place that follows mall hours when dim sum is normally only eaten for breakfast, but. Up on the wall, there is a list of the various dim sum they serve, but all in English.* Maybe there’s something about the higher prices they charge, but. Maybe there’s something about the inauthenticity of the dim sum experience, but. But, this isn’t China, is all I have to say. I remain excited to bring my friends to Dolly Dim Sum to share an experience with them, even if it’s not the “authentic” (?) dim sum experience. And I remain convinced that it’s one of the better answers out there to the “what is to be done [in this mall]?” question, if you’ve been put in the situation where it has to be asked anyway.

When I think about Dolly Dim Sum, I think not so much about the food, but more about the fact that every time I’ve been there I’ve been happy. (A fact that is probably enabled by the deliciousness of the food, even though I don’t think of it. Good food brings people together, because it enhances the quality of life in the moment of eating, even if the food itself is unremarked upon. I don’t have studies or facts to back this up; I’m just happy.) Dim sum, I feel, offers a utopic vision of eating, because of how it induces the eaters to share. Rather than each person ordering their own meal, and maybe sharing a starter, and maybe trying bites from each other’s plates, dim sum is several small dishes that are supposed to be shared among all the people eating. The nature of Dolly Dim Sum also encourages more chairs at the table, because more mouths eating = more of different types of dishes you can order. On the few occasions that I’ve been to Dolly with only one other person, we found it impossible to finish everything in front of us, but also impossible to order a lesser assortment of dishes.

Everyone has their secret arsenal of Dolly Dim Sum’s, a.k.a places to take a date, or places to make conversation easier, or places to buy dinner for a friend you haven’t seen in a while, but what I find so funny is that we think these places are guaranteed crowd-pleasers when maybe it’s really just us wanting to return. I enjoy bringing people to Dolly Dim Sum, but I can’t necessarily say that it’s had the same impact on them as it’s had on me. It started because an ex-colleague recommended it to me and a close friend; then I suggested it as a dinner spot to another friend because it was still a novelty to me and I knew we had a shared love of dim sum; and then it was a place that I suggested for dinner because I couldn’t figure out where else to go. Twice, it’s been the destination for a farewell dinner–first for me, and then again for an ex-colleague. But it’s because I always know there’s going to be that guaranteed pleasure of sharing warm food.

“What do you want to do?” in this city saturated with malls. I’ll do what I always do: return to the places where I was happy, and eat the food I’ve always loved since I was a child, and eat also like a child, because I’ve never found a graceful way to eat dim sum. And then I’ll bring you too. 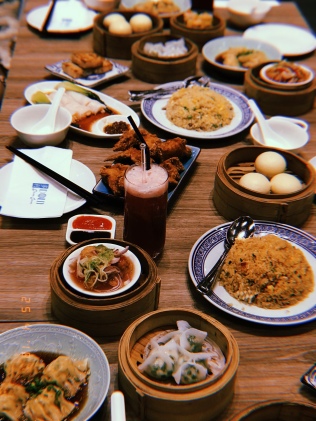 [This post isn’t affiliated with or sponsored by Dolly Dim Sum in any way. Also don’t come to me if I made you try DDS and you ended up not liking it: I’m mostly writing about myself here.]

*Nb. use of the words “various other” and “generally”. I’m mainly thinking of the dim sum/Chinese restaurants where there’s a white tablecloth and the waiters wear suits, but of course I know about the red-cloth Chinese restaurants that are just as good as–if not better than–their white-cloth counterparts. Another post another time.

*When we were younger, my brother loved eating egg tarts. He couldn’t stop eating them. My brother and I don’t talk too much anymore, it’s just how life goes, but maybe when I order egg tarts it’s not so much because I love it (and I don’t, it’s always been my brother’s staple), but because he did. I guess it’s a way to pay a secret homage to our shared childhood, a way of saying, even if just to myself, I remember this about you. I could never forget.

*As an aside, do you want to know something I find so exciting about Malaysia? It’s that when a dim sum place translates Chinese food names into English for their menu, I wouldn’t consider it a bastardization. It’s that I don’t even think a single Chinese person works at the Nu Sentral branch, and I have no problem with that. It’s that the translation into English shares the loveliness of dim sum, makes it understood and accessible to other races in Malaysia. And it’s not complicated, and it’s not cultural appropriation, and it’s not whatever wagamama tries to do with Japanese food, and it’s really easy and cool and I love us.