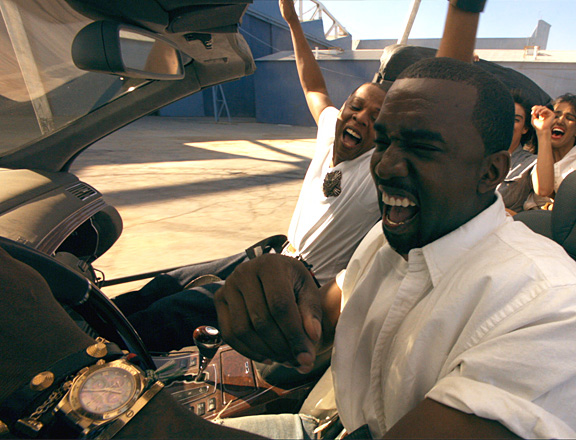 It’s been a while since the release of Kanye West and Jay-Z’s collaborative project, Watch the Throne, and an even longer while since streaming platforms came to dominate the way we listen to music. Since the album’s release, it’s only ever been available to stream on Carter’s own Tidal platform. At the time that Watch the Throne came out, I naïvely considered it one of my most-loved rap albums, because I barely knew any rap albums at the time. It was a time when people still used to say “swag”.

I was thinking about Otis Redding’s Try a Little Tenderness today, and when I heard that descending piano key I remembered the way it acted as the “bass drop” point in a Watch the Throne song, except I couldn’t remember which. (Incidentally, how funny that for most people around my age, their first introduction to various modern classics like Otis Redding are through the samples on contemporary rap music. It’s only through rap that I discovered Redding, Gil-Scott Heron, James Brown.) For the past few years, I’d been almost exclusively listening to all my music on Spotify and ignoring everything that wasn’t on it. I’d forgotten the days of downloading music illegally, of not having the entire musical world at your finger tips; the days when you could listen to an album on repeat for weeks straight for no other reason beside that you just hadn’t downloaded any new music recently. The days when discovery took a bit longer, but music was allowed to seep in a bit deeper. When I looked up Otis on Youtube for the first time in years, I couldn’t help a big grin spreading across my face in public at the memory of lines like, “They ain’t see me ‘cuz I pulled up in my other Benz / last week, I was in my other other Benz.”

A couple years after Watch the Throne came out, it would soundtrack Baz Luhrmann’s adaptation of The Great Gatsby. Two black men deep in 21st-century American decadence soundtracking the decadence of white Americans in the 1920s. It seems odd that this album is now almost a decade old, odd that there’s such distance between now and a time when West and Carter would make music videos as simple and honest as the one for Otis, in which they’re smiling, revelling in their own excess; a time before Carter became more art-house following Beyoncé’s footsteps, a time before West went a little more off the rails in his success. They were still Gatsbys in the way they flaunted their wealth, not yet the Buchanans they are now.

The album, so deliciously, arrogantly titled, was my first introduction to decadence-rap. I hadn’t discovered trap music yet, in which everything –love, politics, anxiety — is put into the service of flaunting wealth. Maybe if I’d stopped at this album, allowed it to fade peacefully into the ether of not-on-Spotify, I might have been saved from discovering everything else that came after, all the Youngs, the Yungs, and the Lil’s. Watching the video now is a surreal retrospective realisation of how naïve we’d been, and by “we”, I mean me, but also West and Carter. How naïve I’d been to think this was the best/worst it could get, how naïve of West and Carter to think that one luxury car was enough, even if it did have suicide doors.

*Please read all my writing on rap music with a heavier dose of irony than usual.